Lord I pray for our country, so divided, our ties to one another broken by consumerism and competitiveness. Help us to reimagine community and our common life, so that all are included, seen and heard. Please raise up politicians, community workers, ministers who are willing to listen, to act with integrity and to build bridges so we can live in a place where all have dignity and purpose. Enliven your church to play its part. Amen

Jesus you spent time with people who were excluded from society because of their mental ill health. Please help those who are struggling with mental health now, especially so many young people waiting for help and support. Please sustain them, heal them and help them find peace. Bless all who work in young people's mental health services, Camhs, GP's and counsellors. Amen.

Lord I pray for everyone who is being changed over to UC at the present time. Please help the change to be made quickly and bless them with support and means while the change happens. Please would the government act justly towards those who can't work for whatever reason. Amen

See more prayers and add one of your own >>>

I was teaching in a Bible college in another country recently, in a diocese where women are not yet ordained. In the group I travelled with there were 4 ordained women and we all taught male students training for ministry. They were adamant that because Jesus did not explicitly include women in the 12 disciples, that meant women could not lead or be ordained. They were looking for very clear directives in the Bible to show that women had a role to play in the life of the church. I come across lots of white male leaders in the UK who feel the same.

Yet when I read my Bible, it shows me patterns, clues, here a little, there a little, piece by piece making a patchwork that shows something quite different. Some of the most subversive and prophetic words come from women, and the ways this is presented are at times prophetic and subversive too – not always in plain sight, in large letters!

I was struck this morning by the song of Hannah in the book of Samuel, and how similar it is in pattern and style to Mary’s song, the Magnificat. Both are full of praise that reflects knowledge and prophetic insight – both clearly women who were educated in the ways of God, and who were inhabited by the Holy Spirit, dedicating their lives, bodies and precious children to the service of God and his people. This week we have remembered Mary Magdalene, who was with Jesus at the end and again at the new beginning, who was first to proclaim the news of the resurrection, which transformed the church and brings newness to each of us. Mary and Martha – one recognised Jesus as the Christ, as the one who has come, and the other prophetically saw his impending death. So much of our knowledge and wisdom is lost if we discount the gifts brought by women.

Regardless of patriarchy, prejudice and privilege, the Holy Trinity have been working in and through women for the good of humankind, the church and the Kingdom since the beginning – redeeming the blame heaped on Eve! We have been privileged and blessed to be given messages of hope and good news for the poor, to be able to journey with Jesus and see him work in us to bring redemption and enrichment to others.  The church would be impaired and impoverished without the love, ministry and service of women. Both Hannah and Mary were directly visited and their own deep faith drawn upon as they offered their whole selves for God’s purposes. The course of history was changed by their sacrificial willingness. So lets keep on being who we are called to be, offering our whole selves and singing out our words of prophecy. 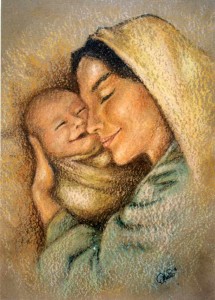 2 Then Hannah prayed and said:

“My heart rejoices in the Lord;
in the Lord my horn[a] is lifted high.
My mouth boasts over my enemies,
for I delight in your deliverance.

3 “Do not keep talking so proudly
or let your mouth speak such arrogance,
for the Lord is a God who knows,
and by him deeds are weighed.

4 “The bows of the warriors are broken,
but those who stumbled are armed with strength.
5 Those who were full hire themselves out for food,
but those who were hungry are hungry no more.
She who was barren has borne seven children,
but she who has had many sons pines away.

6 “The Lord brings death and makes alive;
he brings down to the grave and raises up.
7 The Lord sends poverty and wealth;
he humbles and he exalts.
8 He raises the poor from the dust
and lifts the needy from the ash heap;
he seats them with princes
and has them inherit a throne of honor.

“For the foundations of the earth are the Lord’s;
on them he has set the world.
9 He will guard the feet of his faithful servants,
but the wicked will be silenced in the place of darkness.

“It is not by strength that one prevails;
10     those who oppose the Lord will be broken.
The Most High will thunder from heaven;
the Lord will judge the ends of the earth.

“He will give strength to his king
and exalt the horn of his anointed.”

“My soul glorifies the Lord
47     and my spirit rejoices in God my Savior,
48 for he has been mindful
of the humble state of his servant.
From now on all generations will call me blessed,
49     for the Mighty One has done great things for me—
holy is his name.
50 His mercy extends to those who fear him,
from generation to generation.
51 He has performed mighty deeds with his arm;
he has scattered those who are proud in their inmost thoughts.
52 He has brought down rulers from their thrones
but has lifted up the humble.
53 He has filled the hungry with good things
but has sent the rich away empty.
54 He has helped his servant Israel,
remembering to be merciful
55 to Abraham and his descendants forever,
just as he promised our ancestors.”

“How can this be?”: a homily for The Annunciation